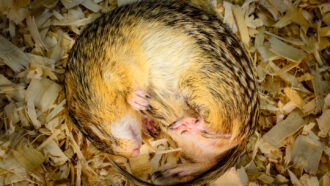 Gut microbes give some squirrels a helping hand to stay strong during hibernation. The microorganisms appear to help the squirrels recycle nutrients to keep the rodents’ muscles taut, researchers report in the Jan. 28 Science.

Understanding how squirrels keep their muscle over the winter could offer a small clue to figuring out how to stave off muscle loss for people who are malnourished or have muscle-wasting diseases, the scientists say.

“After long bed rest, humans are just not jumping up and down and climbing mountains,” says study coauthor Hannah Carey, a hibernation physiologist at the University of Wisconsin-Madison. “But that’s what these [squirrels] have to do.”

Muscle breakdown from inactivity or starvation releases compounds made of nitrogen — a crucial element found in muscle building blocks called amino acids. Too much nitrogen can be toxic, so the body normally eliminates the excess through urine in a compound called urea.

Previous work has shown that arctic ground squirrels (Urocitellus parryii) can recycle nitrogen for muscle preservation on their own, without gut microbes’ help (SN: 12/16/20). In the new study, Carey and colleagues tracked where nitrogen went in the bodies of thirteen-lined ground squirrels (Ictidomys tridecemlineatus) using an isotope, a form of the element with a different mass, as a tracer. In hibernating squirrels, nitrogen that had been processed by microbes ended up in skeletal muscle. But animals treated with antibiotics to clear out gut-inhabiting bacteria incorporated less nitrogen into muscle, a sign that the microbes were responsible.

Some gut microbes salvage nitrogen from urea and use it to make amino acids. Hibernating squirrels can then use those amino acids to preserve muscle, the findings suggest.

It seems that to help the creatures stay strong, Carey says, microbes and squirrels come together.